Yelena Produnova performed a gymnastic vault perfectly in 1999 Olympics. It is considered the most difficult vault in gymnastic history. Some people even called for a ban on this particular vault. There is a very good chance of injuring one self while performing this vault, most of the World class gymnasts just avoid this stunt.


Dipa was an exception. She performed the Produnova Vault in Rio Olympics and stole the heart of the judges, spectators and competitors alike. The gold medalist gymnast of Rio Olympics said, 'Lets rename Produnova vault to Karmakar Vault." There, an Agartalite girl performed exceptionally well and brought fame to the Nation. She could not won a medal, well that's perfectly all right! 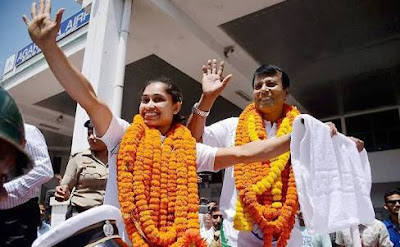 Most of the Agartalites were waiting by the road just to see Dipa once. You don't get to see Olympic celebrities that often, right? It was a great day for Agartala. The happiest thing was, Dipa didn't forget her town even after performing that well in olympics. In India, it is a very common practice that athletes leave their home states in search of greater amount of money. It's good to know that Dipa is an exception. 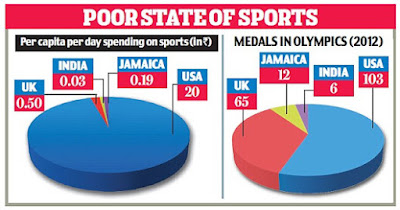 A lot of people are happy that India won 1 silver and one bronze medal in Olympics. Some people are frustrated with the performance of Indian Sports delegation at Rio. Well I think, the Govt can't even claim the 2 medals from athletes too. We live in a country where Govt. spends ₹0.03/person/day and expects medal (for comparison USA spends ₹22/person/day). 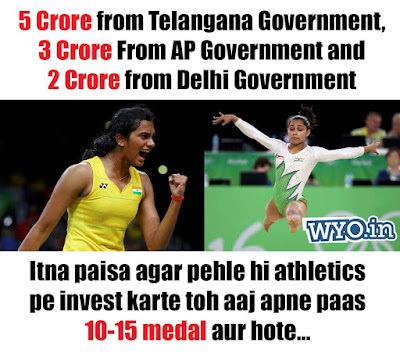 Here in India, the Govt is not ready to take care of the athletes when they are struggling. When they win or perform exceptionally well, they are showered with millions of Rupees. Those who are successful does need motivation, I agree. But what's the point spending millions of rupees on Sports person who are already successful, can take up endorsement from different companies and sustain their life style? This thing particularly saddens me.

Kolkata to Agartala in an ATR

"Oh God! You booked your ticket in an ATR aircraft!" He uttered these words with a horrifying look, like I made a fatal mistake! It was bizzar. What's wrong with an ATR? The job of an Aircraft is to ferry me from Kolkata to Agartala, if it does it's job, Why the hell should I be worried!

To convince me that I made a mistake he started to elaborate his and his acquaintance experience in ATR flight. According to him, the ATR aircraft travels at 26,000 feet where as Airbus travels at 40,000 feet. As a result, the turbulent weather an Airbus can easily avoid, ATR has no option but to go through it. The weather today is not good, A cyclone is hovering over Bangladesh. I must go through some really terrible time today, he opined confidently. ATR even takes more time to travel the same distance, he said. And service of Air India, it's better not to mention..

Hearing all these crap, I was not actually very much confident while boarding the flight. I was worried as my father who is recently been operated is traveling with me. The first sight of the flight was like "Oh shit!" The flight was tiny compared to the other aircrafts on runway. There was even no need of stairs to climb on the flight, the door of the aircraft served as makeshift stair. It was a tiny flight with just 48 seats.


Up to this point I was thoroughly upset, but things changed dramatically as we entered into the Cabin. An Air India Air hostess welcomed us and handed over the daily newspaper. The over head luggage space was small, but enough to store small hand luggage I was carrying. I settled down on my seat and relaxed. The Aircraft was soon ready to fly. As the blades started to spin, I realized, the sound in cabin was a bit more compared to airbus.

The take off was smooth. After say 10 minutes as the flight settled mid air, we were handed over our FREE evening snacks packs (Air India Rocks!). Snack pack contained a cheese sandwich, pine apple jam sandwich, 2 sweet and 2 salted biscuit packs and one small soft drink. The pack was good enough to keep hunger centre quiet for next couple of hours.

The sky was cloudy and the clouds formed many interesting patterns. My time passed smoothly watching all those beautiful patterns. As we neared Agartala I was amused to note that Agartala is much greener compared to Kolkata, though it lacks the multi story building the mega city boasts off. The landing was smooth. The scheduled landing time was 6:15pm, but when I switched on my mobile phone post landing, It was just 6pm! Thanks Air India, Thanks ATR! This was my second best travel experience. Some day I shall write about the best experience, when I got upgraded to business class on Jet Airways flight.

PS: What is an ATR Aircraft? Wikipedia says, ATR (Aerei da Trasporto Regionale or Avions de transport régional; Regional Air Transport in English) is a French-Italian aircraft manufacturer headquartered on the grounds of Toulouse Blagnac International Airport in Blagnac, France.[1] It was formed in 1981 by Aérospatiale of France (now Airbus Group) and Aeritalia (now Alenia Aermacchi) of Italy.[2] Its primary products are the ATR 42 and ATR 72 aircraft.

24 hours, this is the average length of day in most of the world. If you are not living in polar areas, there is good chance that you have only this 24 hours to complete your daily works. It's the same length for all, rich/poor, white/black, S/he. But some of us utilize these 24 hours better than others. There are two ways you can maximise your day. The tougher way- You can manage your time to invest more time on productive works.

For those who are not willing to do the time rationing or hate the word discipline, for them, there is a way out! Hire a personal assistant! The job of personal assistant is to help you with your personal works. You can just relax while your assistant is doing all the chores for you. But you need to pay hefty salary to secretary, right? Wrong!

About a year back I wrote about Natasha by hike, a mindless personal assistant bot. It was good for just a few common things. You can read about her here. Today I am talking about a personal assistant app that is actually run by human. It's called Haptik. I stumbled upon this app a few weeks ago. Using it constantly now and it actually frees up considerable amount of time from my schedule! The best thing, you get all these for free.

Haptik has a polished UI! It divides it's content under 8 heading. Reminder- You can ask your personal assistant to remind about anything and every thing here. At recharge tab, you get to recharge your Mobile, DTH etc. They also give you coupon codes for other websites. Looking for an eatery at new place, ask it in nearby tab! Travel options, places of interest, all for you under travel tab. Food, movies, Shopping, utilities are some other useful tabs.

I am using this app for few weeks and I highly appreciate it's performance. I would love to recommend it to you. You can download it here.

Here are some screen shots from haptik.

Here is a video that summerises the performance of Haptik!

Disclaimer: Thia blog is in no way affiliated to Haptik. It's not a sponsored post. If you like my blog, please revisit. Thanks for your time.

Riding the Horses of Moheen

Last few days were very much stressful at work. I couldn't get enough free time to update my blog. During these stressful time, soulful music by Moheener Ghoraguli helped me a lot to coup up. It's the first Indian rock band led by Gautam Chattopadhyay. Their inspiration was urban folk movement led by Bob Dylan, another favourite musician of mine. I will write a full story about Moheener Ghoraguli in future. For now enjoy some of my favourite hits from the band.

Few days back I read a weather forecast in a local newspaper saying "There may be low, intermediate or strong rain, even there may not be any rain at all". The piece was amusing. It must be some printing mistake, but this is the true face of weather forecast in India. Only on a few rare occasions the met department was able hit the bull's eye. This is perhaps the most technologically backward section of science.

The forecast for next few days says there are chances of heavy thunder storms. Actually they are predicting this very thing for last 3-4 days, but the ground reality is different. The Sun God is at his peak shining like a handsome knight in his armor. The mercury is steadily rising with no signs of downfall. The high humidity and lack of any breeze, is making the lives of the common people hell. The wealthy ones who could afford are chilling in their air conditioned rooms. For rest of us boiling out there, the ceiling fan revolving over head is the only relief.

Most of the Agartalites grew with their fans. Even in 90's, the number of AC's were very limited. We learnt to love our fans from pretty small age as it is the one who saved us from the summer heat. Even today people enjoy the attention of their fans during the noon time and the roads remain mostly barren. If Agartalites are asked to compete with Shahruk for fans, we are sure to win it hands down! :p

My mom and dad started their married lives in a single bed room rented apartment. In 1991 they bought a Polar fan with a very little sum. The fan used to disperse a really cool breeze. Then as we shifted to out present home in 2000, three more fans were purchased. They have already gone though thorough make over, but our good old polar fan after just a single coil change gives away much cooler breeze compared to them. I have experienced Havels, Orient, Usha and many other brands, none is even close to Polar. Only a single brand can compete with Polar, that is Cinni!

Few years back I joined hostel. As my room was on the Top most floor, the day long heat used to convert the room into a pressure cooker. The ceiling fans were not effective to circulate air. I bought a  Cinni table fan then and within few days, it was my favourite fan. Within few minutes it would pull the fresh air from outside and calm the room down. Hostel life made me a table fan lover ;)

As we got financially better, dad brought a cooler for home. Unfortunately after a few days use, the water circulating mechanism of the cooler got defunct, now it's used as a table fan only. A few times I suggested to install AC's, but high rates of electricity force us to postpon the plan. Again we are having extreme heat for only a few days (say 15-20 days), so it was not considered wise to install an AC. But as the extreme day count increases, we may have to reconsider our decision.

Fan is not only a tool to get relief in summer. It's used to dry the floor faster after pocha. It's also used to dry wet cloths on an urgent basis. As I am writing this piece sitting under a ceiling fan, it's calming me down and allowing me to concentrate on writing. I must thank my fan for it's effort ;)! Lets end it with an irritating personal experience. Whenever our house maid switches off the fan for dusting she just forgets to turn it on after her job is done.

Have you ever felt for your fan? Do write your funny experience in comments. Share it if you like it. Thanks for your time. please keep visiting.